Goal: set up a Signal instance with no smartphone.

Both times I’ve set up a Signal instance tied to a land-line I’ve had to look things up. This post is aimed at future-me for the third time I do it.

Signal uses phone-numbers to identify users. This can seem to go against the notion of a “private communication system” (since often people conflate “privacy” and “anonymity”) however it does come with an advantage: you already have a contact-list consisting of phone numbers (more about this on Signal’s blog). Luckily, Signal supports sending one-time codes via voice calls so we can use any phone number (not only SMS-capable ones). For more, see “Technical Background” below.

We want a Signal install that uses a land-line phone number. We will use Signal Desktop for messaging.

Follow the install steps for both above. This should leave you with signal-cli and signal-desktop in your $PATH.

We will now register our telephone number with Signal (using signal-cli). This will cause Signal to phone us on the number and read a temporary code. We then use signal-cli to confirm that number (thus showing Signal we do indeed control that phone number). We have now made an account using signal-cli. Next we pair this to our Desktop install.

I will assume that signal-cli is in your $PATH and that all the defaults are fine (this stores data in ~/.local/share/signal-cli on my Debian system).

If you want to set a “registration PIN”, add --pin 1234 (for example). This would prevent anyone who doesn’t know the PIN from registering this number in the future. (For more information, consult Signal PIN information on Signal’s support site).

This will send a message to (587) 555 1111 (assuming they are on Signal as well). It should print out some ID number of the message. To receive any read-receipt or reply, run:

(The -1 means “forever” so ctrl-c to stop it). For bonus points, you can set your name and avatar so contacts can recognize you more easily:

When you start a freshly-installed Signal Desktop, it should be showing a QR code and offering to pair. It will look something like this: 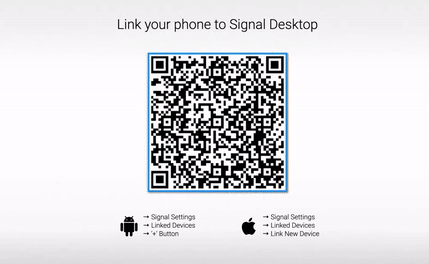 On Debian, apt instal zbar-tools provides the zbarimg binary, which can decode the QR code:

Now we cut out the URI, starting at tsdevice:/ and run signal-cli addDevice:

Remember to quote the URI part, because there are &’s in it. Now that we have things paired, Signal Desktop can be used as normal. It may be important to run signal-cli -u ... receive -t 1 occasionally (I don’t know that though, as I do routinely use the CLI).

The guts of the Signal encryption system is a private key-pair. Technically, this means that any Signal install can be tied to any username. Since a Signal “username” is actually just a phone number (that you control) this makes it possible to register a land-line, as in this post. Thanks to the ability to add a “registration PIN” now, you don’t even have to maintain control of the number indefinitely.

In Canada, a good way to acquire a phone number cheaply is 7/11’s “SpeakOut” product. When I last looked, you could buy a $10 SIM card and $20 worth of “minutes” that take 365 days to expire. Thus for $30CAD you have a phone number you control for 1 year. If you add a “regisration PIN” then whomever gets it after you cannot register a new Signal account with it unless they know the PIN you set.

Update: a colleague points out the Tossable Digits service, which can probably be used as a source of number.

Although Signal themselves do not provide a command-line client, a developer has released one on GitHub which uses the libraries that Signal does release as open-source. This does not yet support so-called “new groups” so the latest features in “new groups” are not availble to any group you join (the invite link being one I know). It does, however, support most other things (including attachments, read-recepits, emoji reactions, …) and I use it as my main client on some computers.